skip to main | skip to sidebar

Blue and gray in the blood red clay

War is not glorious--it is a hideous waste. Historians would do well to stop trying to give "meaning" to war. DGF and Ed Ayers are doing their part to strip war of romance. The fan club's collection of Civil War songs supports their efforts. We do not include anthems or marching songs: no "Dixie, " no "Battle Hymn."

Our collection is about death and regret, longing and loss. More than half a million boys and men died in the war, the equivalent of six million souls in terms of today's population of the U.S. Any Southerner who spends time on ancestry dot com sees death dates in the 1860s of great great great grandfathers, uncles, and male cousins many times removed. It is a wonder any of us are here at all.

People are still writing Civil War songs. Here is perhaps the newest, one that silenced an entire mini-van of DGF fans when it came on the radio a few weeks ago. It is by Shawn Mullins, a Georgia man whose work usually takes on subjects like Tinsel Town, dying auto towns, and lost love. He grew up near Catoosa County, and he channels a soldier destroyed by the killing he has done in a battle there. We don't know if he wore Blue or Gray, and we don't care.

I can hear the screaming I can smell black powder burning
Cannon balls flying and Gatling guns a turning
A thousand souls a thousand men a thousand holes they’s buried in
shallow graves in the cold hard clay of Catoosa County.

And the blue and the gray paint the colors of the lie
And the old men find a way to send the young men off to die
If I could I would place a hundred billion dollar bounty
On the hate that makes a war that digs the graves of Catoosa County.

And the blue and the gray are the colors of the lies
And it’s true you can pray but even God ain’t saying why
If I could I would place a hundred billion dollar bounty
On the hate that makes the wars that digs the graves of Catoosa County.

The power of song

To commemorate the sesquicentennial of the Civil War, the fan club has been collecting songs about the War and dusting off our fiddles, guitars, mandolins, and upright bass. (No we did not allow one member to contribute instead a washtub bass. We have our standards.)
We focus on music that laments the waste of war, in keeping with DGF's most recent book, The Republic of Death. Drew has urged writers about war to acknowledge the ability of war to provide meaning and sense of agency to ordinary life. In recognizing that power we might begin to over come it, she has said more eloquently.
What better song to start with than Blue-Eyed Boston Boy. It tells a story has surely happened countless ways too many times over, in this war and in others. The author is unknown and the imagery rich: "the Rebels with shot and shell Plowed furrows of death in the toiling ranks..."

He was just a blue eyed Boston boy his voice was low with pain
I'll do your bidding, comrade mine if you will do the same
But if you ride on and I should fall you'll do as much for me
My mother at home is awaiting the news so write to her tenderly
She's waiting at home like a patient saint her pale face filled with woe
Her heart will be broken when I am dead I'll see her face no more
Just then the order came to charge for a moment hand touched hand
They answered aye and on they rode that brave and devoted band
Straight way was the course to the top of the hill and the Rebels with shot and shell
Plowed furrows of death in the toiling ranks and guarded them as they fell
There soon came a horrible dying sound from the heights they could not gain
And those that doom and death had spared rode slowly back again
But among the dead at the top of the hill lay the boy with the golden hair
And the tall dark man who rode by his side lay still beside him there
There was none to write to his blue-eyed girl the words her lover had said
While a mother at home is awaiting her son she'll only find he's dead
While mother at home is awaiting her son she'll only find he's dead

This is the best version, if you ignore the ambient noise and walking around. Looks kind of like the fan club band only different!

No Help for Us

A blog devoted to celebrating the Southern lady cannot ignore The Help, as much as it would like to.

Our problem with The Help is that any time a white lady describes the Jane Crow experience she is aggrandizing herself. She is showing how fine she is to recognize how benighted she once was and now isn't. That sort of self regard is unseemly. The only respectable position on the subject for the white lady is sitting down and being quiet for about, oh, 200 or 300 years. It's time for the non-white ladies to speak.

And the last we will say, in regards to The Help, is that its immense popularity and tsunami of praise (largely from white ladies, we can't help but note) embarrass us to death. And that is all that we have to say.
Posted by Miss Grimke at 1:27 PM No comments:

DGF and I have been fighting off a Southern invader ever since it showed its evil face in the spring. It seems perhaps at last we will prevail--Northern technology once again overcoming sheer cussedness.

Our foe: Poison Ivy. A vine grew up one of the dear maples of Elmwood, so high it nearly disappeared among the branches and new leaves. First, with the hatchet we cut the vine just above shoulder height. Within days the leaves above the cut withered and died. Then, wearing gloves we had bought in a rainbow of colors to protect our hands from Miss Clairol, we applied herbicide. We did not mess around with "organic."

Weekly we painted the leaves, and as the painted ones wilted and curled, new bright greenish yellow baby leaves appeared. But we marched on, and this weekend we found no new poison baby leaves.

Miss Grimke: We can certainly blame global warming for Col. Poison Ivy. Can we also blame BP? For not finding alternative sources, say, forty years ago.

DGF: Of course. But when you get right down to it, we have only ourselves to blame.

Miss Grimke: Perhaps but we can certainly not blame Jimmy Carter.

DGF: He did what he could.

Miss Grimke: Which was not enough.

DGF: We get the leaders we deserve.

Miss Grimke: Do you really believe that?

Miss Grimke: I see you are wearing that petroleum-based fiber, which is great for bushwhacking at Elmwood.

DGF: This is going to be painful on so many levels.
Posted by Miss Grimke at 10:47 AM 5 comments:

We in the fan club think J.D. Salinger wrote a few good stories(not including Catcher in the Rye, which has not stood the test of time—ask anyone under 20!) and then coasted for the rest of his life. Nice job if you can get it! He could have been as over-rated as John Updike if he’d written more.

We have not been successful in recruiting DGF to trash JDS so we’ll move on to something much more interesting.

Susie Boyt has agreed to join the fan club! We are not sure which is more astonishing—that she agreed or that we were bold enough to ask her! Perhaps now we’ll summon the nerve to invite Geraldine Brooks.

To say Susie Boyt writes about fashion is like saying William Faulkner wrote about farming. She ventures broad and deep through philosophy and psychology. Her ethical and decorating sensibilities are finely tuned. She can make it perfectly clear how a particular dress, worn in a particular way to a particular occasion, can be a deeply moral act.

We have long been fans of hers, reading her columns aloud to one another at meetings. But a recent one of hers, appearing after we’d been made furious by valances, sent us into an ecstasy of identification. You see, Susie Boyt is embarrassed by pelmets (look it up). http://www.ft.com/cms/s/2/976b0a58-cfe0-11de-a36d-00144feabdc0.html

SB is obsessed with Judy Garland and Henry James. She said the most wonderful thing about her HJ obsession in her autobiography: “The question that intrigued me in terms of both love and work was this: how can one be good and live fully in the world without taking on all any of the taint that the word 'worldly' carries.”

We are honoured to have Susie Boyt as a member of the club and to make her an honorary Southern Lady.
Posted by Miss Grimke at 5:18 PM 1 comment: 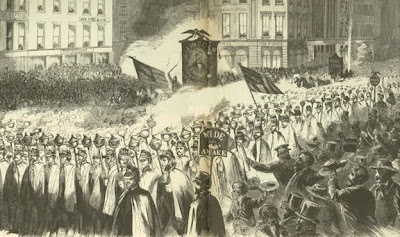 The fan club, frustrated by the hostile tone of public discourse, has decided to throw in the towel and enter the fray.

We are taking as our model the Wide-Awakes, recruiting people to dress in capes and caps, light torches, and march solemnly in formation through the streets of Cambridge at all hours of the night.

Just as the Wide-Awakes provided moral support and inspiration to an embattled and progressive leader, so shall we support dear Drew Gilpin Faust. Join us! Everyone looks good by fire light!

(I can see her face on the banner but wonder about the eagle.)
Posted by Miss Grimke at 6:03 PM 1 comment: 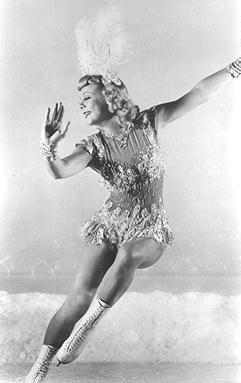 DGF did not pick up on our suggestion to move the Fogg to Allston, but we can’t complain that the skating rink was a bad idea.

Ice skating is an alien activity to southern ladies, but those of us transplanted north find it a delightful way to keep our figures and an excuse to wear cute outfits. I won’t say that we went skating with Drewdie, but I will say that she continues to demonstrate her ability to balance on a fine edge without losing her poise.

Over a few mugs of mulled wine after some mildly strenuous activity involving spinning and gliding, DGF and I dissected some of the finer points of winter footwear.

Miss Grimke: How many pairs of boots should a lady own when she lives up north?

Miss Grimke: Last week I wore my black Bean duck boots, my two-tone La Canadiennes with the sheepskin lining, my brown Rockport hikers, and my shiny back tight-calved high-heeled dominatrixs. And that was on Tuesday.

DGF: I find that my wellies suffice for all occasions.

Miss Grimke: That’s because the world comes to you, and you have a “car,” as they say.

DGF: I need boots to check on the goats and rearrange the Christmas tree branches protecting the perennials.

Miss Grimke: You also need them to wade through the mess that your “critics” emit.

DGF: I find that a sense of humor makes quick work of that.
Posted by Miss Grimke at 11:31 AM 3 comments: